Climate change and what we can do about it

For the third in our series of lectures we are very fortunate to have the benefit of the expertise of two people who are eminent in the field of climate science.

After completing their PhDs James Annan and Julia Hargreaves spent several years working at various labs in the UK in environmental and natural sciences.  In 2001 they emigrated to the Japanese national climate change laboratory and supercomputer centre, since when they have focussed on climate change, particularly in using our understanding of the past to help predict the future.  While working in Japan, they contributed to the 2007 and 2013 reports of the Intergovernmental Panel on Climate Change (IPCC) and were the most highly-cited scientists from Japan in the 2013 report.  They moved to Settle in 2014 where they live with a variable number of foster-cats.

In a period of time when powerful reactionary figures are dragging governments away from evidence based decision making, this opportunity to meet and listen to people who are at the forefront of research is invaluable.

The meeting will start at 7:30 and tea and coffee will be available from 7:15

Questions for us and our Neighbours

Dr Paul Kelly describes the processes and the consequences of fracking. 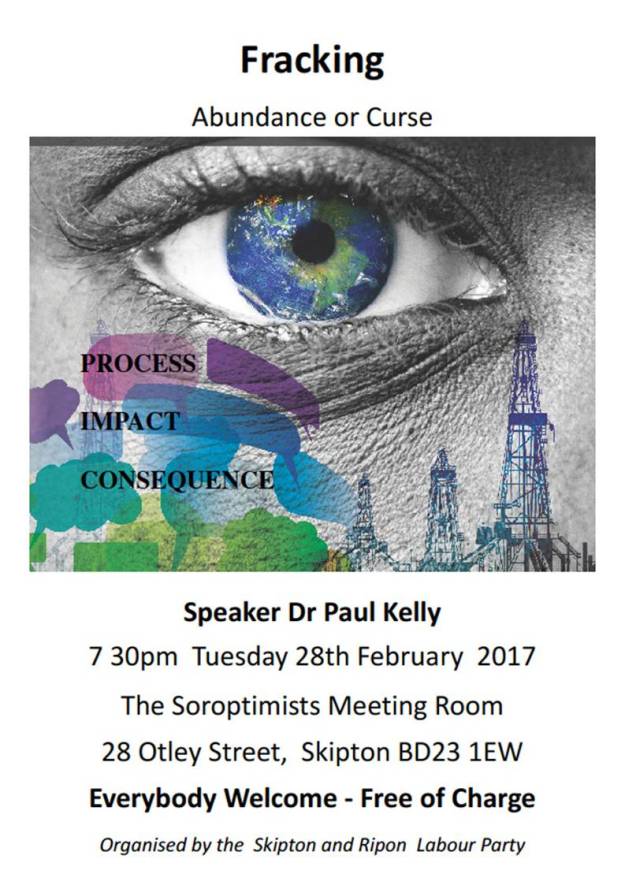 ‘Why We Can’t Afford the Rich’

The first in a series of public lectures organised by  Skipton Labour Party will be held on Wednesday 30th November at 7.30pm at the Soroptimist Rooms, 28 Otley Street, Skipton.

Andrew Sayer, Professor of Social Theory and Political Economy at Lancaster University, will speak on ‘Why We Can’t Afford the Rich’.  Andrew has a long-standing interest in moral economy and has written several books on political economy, inequality, class, and philosophy and ethics.

The lecture series, between now and the May county council election, has been organised by the party to raise awareness of the social and economic impact of the past six years of the Tory government’s economic policies.

It promises to be a fascinating evening.  All are welcome – bring a friend.  No need to book, just turn up.

Tea and coffee will be available from 7:00pm